Scout made the trip home last week with an overnight stop in North Carolina. They arrived home Wednesday and were no worse for the wear after the long trip. Cue the synchronized rolling and galloping (clearly, Scout's idea): 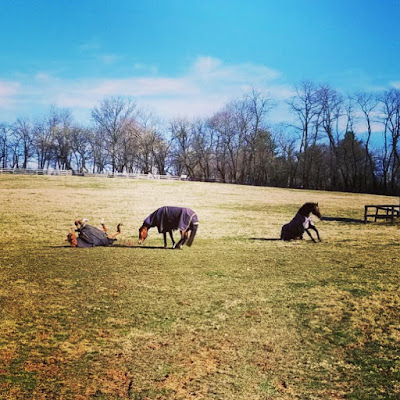 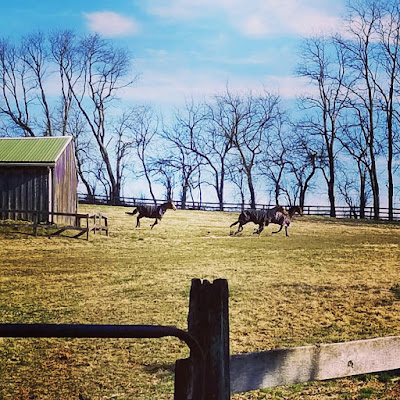 I let him settle in for a day or so and Nora took him for a spin to be sure he wasn't feral after plenty of days off and the long trip home. I was delighted when she sent me an update saying NOT FERAL (along with heart emojis). So we decided I'd come down for a lesson the following day!

He was super cute when I got to the barn and spent a lot of time nuzzling me and saying hello in his coy manner. I feel SO fortunate to be able to keep him at her farm for the time being. It's a bit of a hike (it takes me about 50 minutes each way) but the barn is stunning (Scout's stall is easily 14 x 20), it has AMAZING hacking and huge hills, super turnout, a regular ring, a xc course and a grass jump field... it's pretty perfect. Better yet, it's QUIET, there are no boarders that aren't training clients and she has a few ship-in clients for lessons. The farm has super chill energy and the horses seem to love it. More than anything, I'm craving some guidance and supervision for this next chapter in our journey together.

I brought both my saddles to see if they would still fit Scout with his new and improved physique and much to my dismay, they are NOT going to work. And while I'm devastated to sell both my jump AND dressage saddle she reminded me that she doesn't even recommend a dressage saddle until the rider is going Training... okay, fair enough. I'm hoping I can cobble together enough money from the sale of those and some side gigs to get something that will work for the long term.

I was stunned to see that my big boy had really grown up during his stint in Ocala. He has some unbelievable muscles that were definitely NOT there before (and keep in mind, I sent him to Florida in really good condition and with a decent level of fitness) -- but it's amazing what someone more skilled can bring out in their bodies. He's got these gorgeous shoulder muscles and a block of new muscle just in front of his shoulder near his withers! I literally went to his stall to say HI and was like, "Wait, did he get bigger?"
So I borrowed a saddle for my lesson and hopped on for the first time in over 3 months. And OH MY GOD... He feels incredible. One of the nicest compliments I've ever gotten from a pro is that I've done a nice job with Scout... that's all well and good, but we were at a physical and mental crossroads where he needed (and deserved someone who could really work out some kinks). He'll always have his shortcomings, but Nora has helped to establish muscle memory where it did not exist so I can continue to make those weaknesses less and less noticeable.

And when I handed over my beloved horse to Nora, I was very open about where he was lacking and what I hoped she could improve while he was with her. Namely, he loves to swing his haunches in tracking right, loves to pop his shoulder tracking left and was quite resistant to the right leg (which we had come miles and miles from where he started by the time I left him with her), he had a mostly confirmed half-halt on the flat that needed fine tuning and he had a bad habit of going deep and pulling down when he got tired.

From the moment I got on I felt a straight and connected horse underneath me. At the walk he MARCHED, connected in both reins and looking for guidance with my legs. She had us start the lesson with leg yields from the quarterline to the rail and you should have seen my face when I applied my leg and put my weight in my outside stirrup he responded by moving his whole body! When I needed more push, he would respond and if he started to get quick I could halfhalt with my outside rein to keep him from breaking into the trot. He still felt like my horse, just improved. We moved on to trot work and we explored his range within that gait by getting the energy we wanted and then putting him on a 10 meter circle and asking for shortening and lengthening there, then leg yielding him out until we were going large again. It was incredible what a difference it made to create all that energy in a small circle and then keep it going around the ring. She had me work on collecting his trot by posting quieter but more up and down and then really letting him out and posting big to get a lengthened trot. He has buttons! Better yet, when he wants to get a little deep, all I have to do in close my leg and he comes UP at the wither and changes his connection. There was zero sucking back against my leg, there was no nappy behavior, no kicking out, no tail swishing or ear pinning -- just a fit athlete with a "Yes ma'am" attitude. *Sorry about the crummy video stills.

We moved up to the canter and I made the mistake of asking him like a green horse which he completely told on me for doing and sort of scrambled into the canter. But given that we were starting on "my" bad lead I was super happy that he picked it up and felt actually straight. From here she had me shorten my reins by 3" and keep my hands out in front of my with my elbows at my side and really scoop him up into the contact. She kept acknowledging that he has a REALLY big canter, but that it was important to ask for more and more hind step to get him really uphill. We practiced compressing the stride and then thinking gallop down the long sides to get him really uphill, from there I could half halt in my body and keep the step but at a slower pace. I had the silliest grin on my face the whole time. Here I was riding this horse that was up in front of me and I felt like I could actually ride a little bit!. For the downward transitions all I had to do was open my chest and let out a breath and he'd go into a beautiful forward trot, in balance. Once I got my shit together and started riding him like the young adult that he is, our transitions were much improved. He's now listening to a more educated aid for the canter (inside leg and outside rein) and stepped beautifully into the canter once I figured that out!

He still takes a TON of leg, it's not that he doesn't have energy, but he needs support at the base of each stride to keep him UP and not just running flat. Luckily Nora and I are similar in height and build, so at least while he's been learning a more refined way of going it's been with someone with normal sized legs!


I had been so nervous beforehand that 1. I forgot how to ride and would make a fool of myself, 2. Scout would not respond to me the way he did with her, 3. I wouldn't like Nora's teaching style. Even after just one ride together, I love knowing that if I tell her what I am feeling she really understands what I mean and can help me translate my aids to Scout a little more clearly. I enjoyed her teaching style enormously, she rides every stride with you and is patient while also making you hold up your end of the riding deal. He's so, so special and I am incredibly happy that I made the decision to send him to Ocala. Thank you to everyone that encouraged me to do so and to everyone that supported all my neurotic behavior while he was away.


I had been kicking myself a little for not riding him when I went to visit in February but I felt like it was worth waiting until he very end to see just how much he had learned. It was like finding your Christmas presents and opening them a few weeks early... And in the end it was SO worth the wait!!!