Falling silent -- a moment to refelect on losing my best friend

I'm sorry for the silence, but I've been struggling for the last few weeks. So many amazing things have happened (lots of xc schooling, Scout's recognized debut, saddle buying, Land Rover) -- and I promise to talk about them all but I lost my beloved dog Hugo on April 10th and I've been grieving since then.

In the early hours of April 10th, I woke at 2:50am to the sound of our other dog, Lucy growling. Alarmed, I went to investigate what the problem was only to find Hugo (our 11 year old boxer) in full Grand Mal seizure in his bed. Tongue hanging out, eye balls rolling around, whole body convulsing, foaming at the mouth -- I watched in horror while I tried to keep Lucy away from him. The whole thing lasted 3-4 minutes but felt like an eternity. When he came back around he was understandably confused. He had lost his depth perception and it appeared that he couldn't see me -- he was sniffing for me but could hardly hold his balance. He was showing signs of major neurological deficits and I watched as he tried to maintain his balance unsuccessfully. I started bawling and my bf woke up to the horrible scene of me sobbing, holding my dog. We were able to get him outside (there's a slider to the backyard right by where he sleeps) and with some help he was able to pee, but every time he stopped moving he'd fall over. I called our local emergency care facility and they told me to bring him in right away. I left, alone with Hugo flailing around in the back seat of my truck. He was confused and scared and very unstable. He was able to walk into the clinic (albeit like a drunk sailor) and the vet tech assured me that was a very good sign. We were the only ones at the clinic which was a relief, and the vet went out of his way to make us feel comfortable. Initially the prognosis was fair... while seizures in older boxers are quite common the vet said that we could start him on steroid therapy to help him going forward and that he'd have a decent chance of not relapsing (but also advised us that he couldn't guarantee if he'd live another few months or a year, etc) -- we talked about what his quality of life would be and what sort of complications might arise from long-term steroid treatment. As we were discussing the treatment, Hugo's face started to twitch again and he began to have another seizure. They took him back and he continued to worsen. And every time they tried to bring him out to potentially come home with me he continued to seize... so I finally asked the vet if  could take him home so I could have a vet friend come put him down at home and at first he agreed but then Hugo continued to have seizures. Finally, the vet came out and asked me if I could ask my bf to wake up the boys to come say goodbye... the reality set in that I wasn't going to be bringing my beloved friend home again. Luckily my very best friend was working a bar-tending shift that night so she was still up to talk me off a ledge. The boys came to say goodbye and I had the vet sedate Hugo as he was in a constant state seizing and just generally being scary. I did not want the boys to see him that way. They were super nice and were able to get him quiet enough for the boys to say goodbye to him peacefully. Finally, I had them leave so I could be with Hugo during his final moments.

I stayed with him for a long time. I felt like the whole thing was so sudden, so awful I couldn't really comprehend on my own. I am sad that I had to do this by myself, I felt alone and desperate. I kept telling Hugo that I was there and he wasn't alone -- I hated being there, I wanted more for him. It was all so sudden.

But in the end, it was all so peaceful, so quiet. I got to choose when it was time, which was awful because Hugo tried to follow me... but it was so still and serene at the end. The clinic was amazing and we got to take him home to bury in our yard. I'll admit that the hardest part of all of it was bringing his body from my truck to the garage. It was all too real then and reunited, we both sobbed like children.

The days that followed didn't seem real at all. He was my best friend, the being closest to me... he's been there through the worst and best of my life. I've spent a quarter of my life with this creature that loved me SO fully, so unconditionally -- he never questioned me ever. And now he was gone.

What the vet assured me was that as an 11-year-old boxer, he likely had a brain tumor (they have naturally enlarged pituitary glands) and if it wasn't a brain tumor, it was a tumor that had in fact spread to his brain. Nothing we could have done would have prevented or predicted the outcome.

My history with Hugo started with a Facebook post from a friend who was living in West Philly. She was grabbing a coffee at a little place called the Greenline and saw a dog tied up outside. Not uncommon for the area but it was raining that day and he was there a little too long. A few hours later she came back by the coffee shop and the dog was still there so she took a picture of him and made a plea on Facebook to see if anyone knew who this dog belonged to. When no one came forward I asked if he was still there and offered to go pick him up so he could have a safe and dry place for the night (I even borrowed a friend's car as I didn't have one at the time). He was so happy to get picked up and I didn't think twice about bringing this mangy dog into my house. The poor guy had an embedded collar, he was unneutered and absolutely covered in fleas and a bit feral.

That first night was rough, but I think it helped us bond. He was so flea infested that it took THREE baths to get him into a reasonable state. Literally, he'd shake and fleas would fly onto the ceiling and walls of my bathroom. The poor kid was just suffering. It was clear that he didn't have much training at all but he was sweet and kind. I was determined to find his owners, surely someone must have missed this lovely guy?

Well, no one ever claimed him and after having him looked over by a vet and scanned for a microchip a few weeks later he became mine. The rest is history... he's been with me for the last 10 years... through the highest of highs and the lowest of lows. This selfless creature greeted me every day like it was the best day of his life. I often said, "I wish I was excited about anything the way Hugo is about EVERYTHING". That kind of joy for life is incomparable.

He became a part of every family he met, teaching young children to trust and enjoy large dogs (our boys included), spent countless hours in the office with me, and immersed himself into every aspect of my life. While I wasn't looking for a dog to join my life, once he was there it was hard to imagine my life without him. 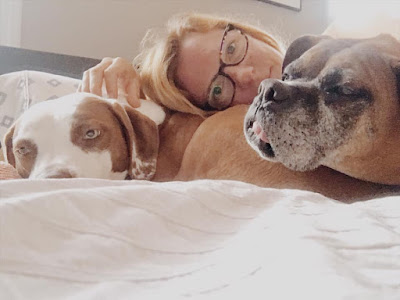 And here I am in the wake of his sudden death still trying to reconcile what life is like without him. Every day I'm reminded of the love and joy he brought to my life. The absence of it feels visceral and harsh and incredulous. Because even in my darkest days, when I didn't love myself enough to get out of bed he loved me as much as my best days. He taught me the absolute power of unconditional love, and I don't know if I ever deserved it.

When I decided to get a second dog, it was entirely so that Hugo could have a friend. He was never a dog park kind of dog, but he always loved spending time with dogs one on one. Lucy insisted on bonding with him, which initially he was reluctant about.


It wasn't long before these two were thick and thieves and that makes his loss even harder on all of us. She's having a really tough time in his absence, but she's slowly adapting to the new normal.


In the end, I'm so grateful for the life I was able to provide for him especially during the last year of his life. He had a giant yard and all the sunshine he could want. We let him wander in the woods behind our house and get lost in the smells. He always came bounding back like it was the best day of his life.

I have so many happy memories of this sweet soul, but I'm currently struggling with the last memories I have of him. It's hard for me to put those out of my mind, seeing him so scared and helpless... and there was nothing I could do.

But a good friend told me to remember him a month ago, or 6 months ago or 9 years ago and cling to those memories, so that's where I am trying to stay.


I hope that one day I can live up to the person that Hugo thought I was. 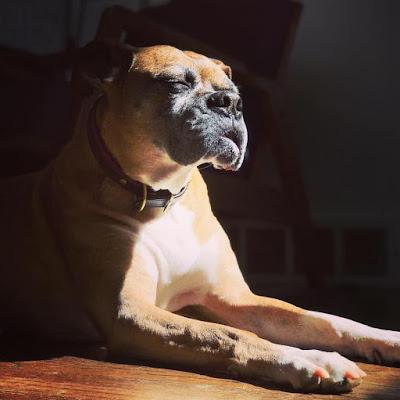 May you always find the sunniest spot to close your eyes and let the world fall away. Rest easy my sweet Hugo.
Posted by Niamh at 6:24 PM