Every day with him is a gift OR how cellulitis sucks

There's nothing quite like your horse getting injured or sick to help jolt you back into reality. I had been studying the fall calendar, looking for first events to take Scout to when I got a message (while I was on vacation) that Scout came in from turnout with a hot fat leg. I didn't panic, but I hated that I wasn't nearby and it was bad enough that a call to vet was placed.

He was initially very lame, sensitive to palpation and barely walking. My vet pulled a SAA on him and he was positive for an infection. So we deemed it most likely a case of cellulitis, he was ordered stall rest, bute for a few days and a regime of antiobiotics (IM/IV). He weaned off the bute and was significantly more comfortable after a few days. Things were looking up. Vet check a few days later and another SAA, improved results. My vet radiographed the leg to rule out any sort of fracture or chip and we decided to plan an ultrasound in a few days. He finished the course of mega antibiotics and was put on Naquazone to reduce the inflammation. The leg was still swollen and very, very hot.
Three days later, the swelling was down, the heat was reduced and the infection was no longer present. My vet ultrasounded the soft tissue around the fetlock and found nothing of note, he was cleared for regular turnout and we opted to keep in a smaller paddock with a quiet buddy vs. his youngster gelding crew. We were scheduled to start under saddle the next day. The following morning not only was his leg fat and hot again, but he also managed to cut/scrape the skin off the front of his cannon on the bad leg #becauseofcoursehedid. UGH.
After checking in with my vet, we decided to cold hose, sweat it, jog and ride him to see how he was feeling. I spent the whole day feeling like I was going to throw up, I had such a terrible feeling that he was just broken and now, 12 days into stall rest and treatment I was mentally just spent.

So we tacked up and headed up the hill (after a quick in hand jog to make sure he was sound) to the ring. I could have cried swinging my leg over. This 4 year old, on almost 2 weeks of stall rest was perfect. We walked around and he felt good, I was grinning ear to ear. Then I picked up a little trot, and he was LAME. Like, crippled, 3-legged lame. WTF?

We took some video of him under saddle and in hand and sent it to my vet. Puzzled, I took his polos off only to discover that he was significantly more sound without any pressure on the swelling. Now I was completely convinced he had a soft tissue injury. Devastated, I made another appt with my vet to re-check him. Another course of Naquazone started, a negative SAA and another ultrasound scheduled.

I'd be lying if I said I wasn't losing my mind a little bit. I trust my vet 100%, but my gut was telling me to look further. I felt like we were out of diagnostics at the farm so I scheduled a visit to New Bolton (it's just a few miles down the road) for a more thorough ultrasound just to completely rule out ANY soft tissue lesions/tears.

And, wouldn't you know it... my horse arrived at New Bolton and was SOUND. Palpated negatively, jogged sound, and they sent me home with a long term anti-inflammatory and told me that basically the cellulitis must have resurfaced again a few days prior, and that when he has an infection/swelling/pressure around that joint he's going to be lame. I was under strict instructions to wean him off stall rest while keeping the problem leg wrapped. I could begin taking the wrap off an hour a day until the swelling completely stayed down.

And with his prognosis up in the air and his short term care being pretty high-maintenance, I made the decision to move him close to home (more about this in another blog post). I needed to be able to wrap/re-wrap his leg at least once a day and monitor his progress more closely. Scout, while going through all of this was foot perfect. His only objection to stall rest could be detected by occasional teeth grinding. He was otherwise a gentleman for all of his poking and prodding and constant care.

The new barn made him a small paddock with a shed in a spot where he could see everything, but stay quiet. Day after day, he improved and I started leaving the wraps off for longer and longer. After about 10 days I switched him to wearing Back on Track wraps just overnight. His leg has stayed cold and tight and he's been sound. We started legging back up and he feels terrific. 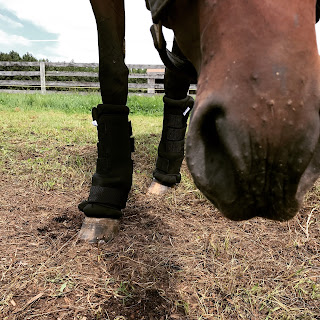 And, as of a few days ago, he started big boy turnout. He's got a 15 acre field and 5 geldings to play with.

This whole experience made me realize something very special about this horse. I've never had that "heart horse" feeling before, but I think I understand what it is now. He seemed to understand that I was trying to help him and he tried so hard to be on his best behavior. While being on stall rest, we bonded more than ever, logging lots and lots of hours just being around each other. No riding, no agenda. Somehow, having riding taken out of the picture helped me to appreciate who he is even more. When I made the tough decision to move him I realized that even if he needed long term rehab, or couldn't be sound beyond a walk that this horse owed me nothing and that I would move heaven and earth to make him happy. healthy and comfortable.

I truly feel like every day with him is a gift. The future feels bright for us.