A huge side benefit of moving Scout was that he was going to be in a location near several blog friends, so when Stacey asked us if we'd like to go on a hack to check out one of the nearby parks I jumped at the chance.

You see, this would be Scout's very first off the farm excursion (going to New Bolton doesn't count!) and I can hardly think of a better duo to help make our first trip a success.

I arrived early to factor in extra loading time if I needed it (so far he's been an absolute superstar for loading). What I really needed the extra time for was cleaning him. OMG, homeboy found the stream in his paddock and has been having a ball. 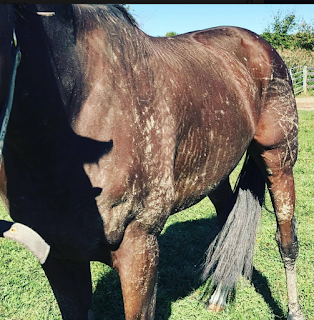 So, I attempted to hose him off, let him stand in front of his fan and then I scraped mud off him until it was time to load. Some first impression you're going to make on Klein, Scout!?

He's not a confirmed self-loader (yet) so we still count on having someone to do up the butt bar for us, but he loaded quietly and we headed out to the park, about 30 minutes away. Crystal Lake Park is a gorgeous place with manicured trails, designated trailer parking, running water, real bathrooms and even a huge concrete horse mounting ramp.
Stacey was already there and we chatted for a bit and I put Scout's bridle on and unloaded. He looked around a bit (he suddenly seemed MUCH taller) but took a deep breath and relaxed and started grazing. I fully utilized the mounting ramp to get on and we were off!

I seriously had nothing to worry about though. This horse man... I feel like I've got PTSD or something because I'm always waiting for the other shoe to drop, for him to act stupid or hot or spooky. But, I think what he's taught me in the last 4 months is how to trust. I feel like now, I trust him to behave how he has time and time again. He definitely looked around and was quite aware of his surroundings, but his only tension could be detected in some initial teeth grinding. Before I knew it he was stretching over his back and swinging along like he'd been doing this his whole life.

We trotted for a nice portion and I'm happy to report that Scout felt super sound. He just cruised along behind Klein who set a nice pace. After going around the perimeter we headed into the woods where Stacey promised some very steep hills! It was probably some of the steepest terrain that Scout's ever encountered, but he picked his way up and down and even crossed a narrow wooden bridge that I thought he might give me grief about.


We rode for about about an hour and fifteen minutes before heading back to the trailers. We certainly could have stayed out longer, but I felt like that was enough time to get a true feel for his attitude and ability in a new place. I couldn't be happier with his ho hum attitude about the whole thing. Having a horse that you can just throw on the trailer and go is such a blessing. And while Scout's appearance left little to be desired, I think he made a pretty good first impression on Stacey and Klein with his chill attitude:)

I dropped him off at the barn and then drove the 2.5 miles to Stacey's farm (how awesome is it that she's so close?) to meet the rest of her crew! I introduced Mocha to the All Ears app and she was hilarious about it. She was curious about me and then puzzled as to why this strange human was making horse noises! She's completely ridiculous and opinionated but so inquisitive, and almost human-like in her expressions! 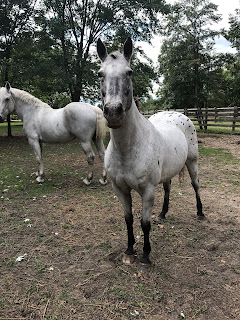 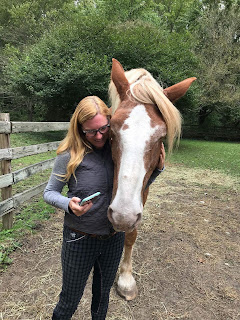 And meeting Wes was just the icing on the cake for such a great day. He's like a giant teddy bear and he's just so sweet and gigantic. I was in love!

I couldn't be happier with how our first off property adventure turned out and I cannot wait to have more with blog friends (I'm looking at you Megan!).
Posted by Niamh at 9:30 AM