Scout's big weekend (prep yo' self for lots of media)


Continuing with our theme from the last post, Scout had a scheduled XC schooling at Fairhill on Saturday. Fairhill can be a very busy venue for a young horse and with a cancelled schooling earlier in the week and the weather being near perfect I braced for a big crowd. Nevertheless, Scout stood on the trailer waiting for our trainer to arrive without a care in the world. Sadly for us, he pooped so much on the trailer that upon departure, he slipped in his own shit and fell down the ramp. So there I was with my horse on his knees covered in poop while our trainer was putting her pinney on. Turns out, he also cut his leg just at the coronet band on his RH and was bleeding everywhere (#onlymyhorse). Luckily it was just a scrape and far from his heart so I cleaned it up, sprayed some Alushield on it and they headed out to the course.

Scout handled the wide open spaces and mayhem really, really well. There were people galloping by, jumping around in every direction and he just kinda took it all in. So they warmed up and he was feeling super. There wasn't anything super tiny around so she headed him at a little floating log for his first xc jump.

So his first jump was not elegant and I think it caught him off guard, but he certainly cleared it! Not to worry, he quickly figured out that we were in fact JUMPING and continued on with gusto.

I love that our trainer is quick to move on once he's figured something out. She doesn't drill him or make him frazzled. He doesn't need to be perfect, but he just needs to go forward, up and over and land in balance. She does an amazing job of helping he find the best place to jump from but really just lets him do the rest. Mostly, she pointed him at the elementary fences and if they went well, she'd canter around over the BN option. 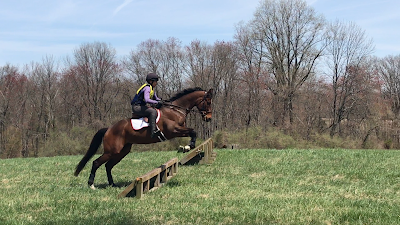 Unfortunately, we weren't able to school the ditches since every serious combination on course was completely monopolized by trainers and their students (grrrr), but he hopped over a bunch of things and spent some time just walking or standing and taking it all in. And I was a very proud Mamma watching him run around. I think our trainer enjoyed it too, as she cantered by saying, "I'm going to steal him." 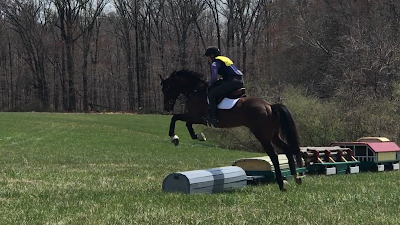 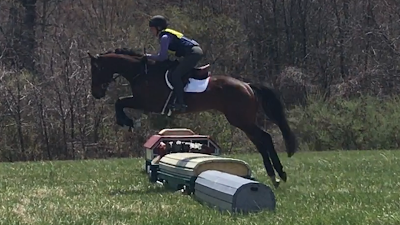 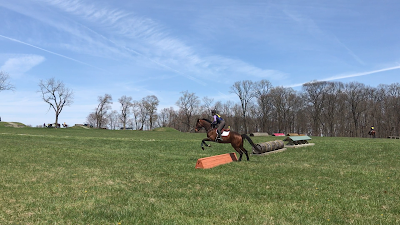 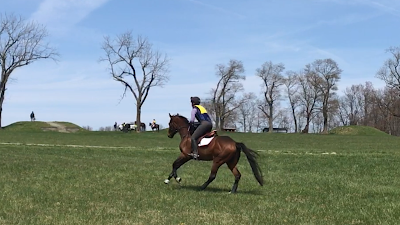 And while I'd love to say that he was a star pupil for the whole afternoon, we met some serious resistance regarding the water. Keep in mind, he's never seen a water complex before and we haven't encountered any natural water crossings since last summer. He didn't understand what we were asking him and he threw a BIG tantrum (*blog post to follow about this), eventually I got him in by leading which we repeated a few times but it's clearly going to take some further schooling and confidence building.

When we finished up, our trainer said she feels that (aside from the water issue) that he's ready to go BN anytime! So, we're going to look at the schedule for the next few months, pick something and get him schooling a bunch more before then. She's take him around his first big event and then I'll take over!

He got stuffed with cookies and told he was a GOOD BOY about a million times and I packed him up and took him to spend the night at Emily's barn for the night. Sunday we had plans to go to our very first paper chase and her barn is just a few minutes from the meeting point so it made sense to let him hang there and get to know his buddy for Sunday's ride! 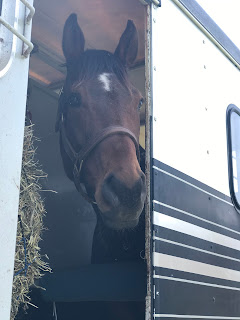 I arrived to the barn Sunday to find a very tired Scout, who had spent the night out with his paper chase buddy (and to make certain his leg didn't blow up post-trailer cutting). Poor kid, tough life being such a go-getter. It was forecast to be an absolutely beautiful day over Chester County and a big turnout was expected. I've paper chased all over that area and also rented a barn about a half a mile from the start so I knew that Kat would be in for a treat being a Florida transplant!

Scout was anxious at the start including not being patient while I tried to climb on (needs further attention) and started to pull a little bit of his shenanigans from the day before (mainly, running backwards). But I was able to get him walking around a bit and that seemed to help settle him. Next thing I knew, we were trotting across a massive sea of green. He felt great, not even a bit of stiffness from the day before and I let him have a loop in the reins as he carried me confidently over the landscape. Both of our horses took to the idea of the paper chase very well and initially neither seemed bothered by horses in front or behind us.

The terrain was super fun with plenty of rolling hills to canter! There were FIVE water crossings (and I'm sure you know where this is going) Scout gave the middle finger to 3 out of five of them. I can't blame him for two of those, they were not inviting AT ALL -- even for me to lead him through they were scary. And out in the middle of 100s of acres is not the place to work on schooling your horse. So my feet got wet, a lot. And I had to get on an agitated horse from the ground three times (thank you to the savior who gave me a leg up at the 3rd crossing) And while it would be easy to be very upset about the water issue, Scout proved to me that he still has the best brain. Our partner out on the ride became increasingly more upset about horses coming up behind us and leaving over the horizon. At first we didn't put two and two together, but every time a group of horses caught up with us, he would lose his marbles. And holy shit, Kat can ride. He pulled out all the stops of naughty behavior creating quite a spectacle and she just rode it out. This made using him as a buddy for Scout to get across water 100% impossible. Thankfully, Scout did not care at all about what his buddy was doing. At one point they came crashing through the woods and slamming in to Scout who was like, "what is he even doing?" He's solid gold this one.

It's always a little daunting the first time you take an OTTB out into wide open spaces. You have to trust that you've prepared them and yourself well enough to handle any hiccups that come along. We walk, trot, and cantered on a loopy rein in a loose ring snaffle and he never got cheeky or strong. He listened even when he didn't really want to (ahem, water) and showed me that he's ready for more adventures like this!

Overall, the weekend was a huge success! Scout got to learn some new skills,  I got to see my horse blast around XC and have some fun with him myself!