Addressing bad behavior -- the Hard NO

Of the three horses I've owned, Scout is far and beyond the easiest in terms of training. Riley was extremely stubborn at times and had a bit of a mean streak. Nolan was hot and sensitive and needed a lot of busy work to keep him focused. Scout has been extremely straight forward in every aspect. But the the thing with OTTBs is that when start their retraining they are often going through lots of physical changes that allow you to mold them when they are at a weak point in terms of fitness. Typically during this let down period, OTTBs can seem very quiet, easy, and almost dull -- you can get lured into believing that they are just that quiet.

Then as they gain new muscle and fitness their true selves start to emerge. When I first met Scout he was simply a sweet, giant gelding. He was curious and easy going by nature. Seemed to take everything in stride and even when he didn't understand what was being asked, he tried anyway. He was almost TOO easy. And if I'm being honest I've always been waiting for the other shoe to drop, for the hard NO to reveal itself.

So now that he's back in full work and roughly a year post-track he's feeling very good about life indeed. He's started to show us that he does in fact, have some sass! The work is getting harder, we're asking for a lot more under saddle, and he's got some opinions about working correctly. That's okay because it's just a part of the learning process and he's going to have some growing pains (literally and figuratively).

For the sake of this post I'm going to characterize attitude into three categories (leaving the PAIN category out).

1. Feel good sass: maybe it's a little buck after a line of jumps, or a head shake during a canter transition, or a squeal for no reason. In Scout's case, it's usually a tail swish:

This type of sass needs no discipline or attention. He just feels good and it's not mean spirited.

2. Naughty/tantrum sass: bucks, spooks, scoots, kicking out, bolting -- these types of behaviors could fall into this category. They're generally brought on by an objection to an aid or environment.
In Scout's case, he like to kick out or buck at leg aids:

Typically with Scout this behavior is VERY short-lived. It's an objection/opinion but he moves on quickly. As long as he does what's being asked (usually it's simply moving forward) then he doesn't get punished (and by punished I mean NOW YOU HAVE TO WORK HARDER).

3. Hard NO sass: this is unique for every horse. Scout's hard NO has just recently revealed itself and it comes from a place of insecurity. It only comes out when he doesn't understand something and gets worried. We first discovered it at Fairhill at the water complex:

A few minutes later, he started rearing. Completely uncharacteristic for Scout. I can say with some certainty that he does not have a mean bone in his body. He was trying to communicate to us that the pressure was too much and he needed to understand what he was being asked to do. So, we let him take a breath and I led him in. He initially tried to pull against me but I reassured him that we'd go in the water together and then he was okay. But, despite him going in and not caring about the actual water, he wouldn't go in without me leading him. We had pushed him just enough that he was left feeling very unsure. This was not because of anything we (the pro and I) did, it's just the first occurrence of the hard NO, and it caught us a bit off guard. It was clear that getting after him, or applying even more pressure might break his good nature. So we regrouped. We let him gallop around and jump a few more things and then we went back to the drawing board.

Because Scout has been so easy, I've taken for granted some basic groundwork training. And you better believe I'm kicking myself about it. Ever since Nolan, I've completely changed the way I think about training horses, and so I feel pretty stupid that I've let my easy horse get away with little things (because they add up to bigger issues -- duh).

So I broke down Scout's Hard NO reaction in terms of ground work, busted out my trusty rope halter and got to work. At a very basic level, I need to be able to control his feet, ALWAYS.

I was reminded pretty quickly that even though he's a quiet horse, I don't hold him accountable all the time. Usually I just let him saunter along with a big loop in the lead while I do a million other things. So I got right to work by making him walk WITH me, not in my space, not casually plodding behind me, right by my side. We played with stopping and backing to help sharpen his reaction to my body and it was clear that he reactions were dulled. I took him to the ring to work on some techniques I learned from my trusty Amish cowboy. I started with simple tasks like walking/jogging at various speeds with me, yielding to pressure, backing next to me and also while facing me. Circling and changes of direction with soft cues on the lead. And after a bit of an ugly start, he began responding extremely well. Lots of licking and chewing and tuning in to me. We moved on to some more advanced techniques incorporating "the box" -- the idea being that you put a horse in an invisible box and control the horses feet within said box. 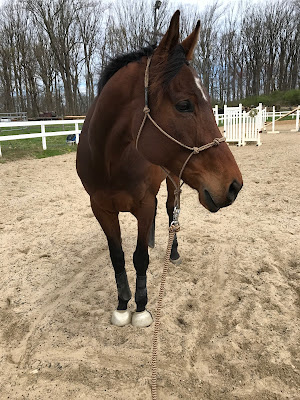 I played with him and this idea for quite a while asking him to yield his hind quarters in various directions and do turns on the forehand on the lead.

Then I took him on a walk behind the barn into the state park to see if we could find some things that might make him unsure.
Turns out, he's super brave and took my lead on everything. He's not really afraid of anything, which almost makes him more of a puzzle.

While this ground work is useful, I was curious to see how it would come into play the next time he met a Hard NO trigger (water). So I set up a two day plan to get him schooling at a stream followed by a day of xc schooling to further the lesson.

The first day, he went on a hack with a solid buddy and I followed on foot. We were prepared to pony him or lead him on foot if needed but the goal was never to let him get to the point where he was shut down. Naturally, he followed his friend right into the stream, but then shocked us all by throwing a bit of a fit IN the water. Tail wringing and backing up, but once his moved his feet again he was golden. He went in and out by himself without issue, even trotting through a few times.

SO the real test would be at Windurra the next day. The water there is a little more welcoming that the complex at Fairhill but there's A LOT to look at there. His farm is on a very busy road and they are actively doing a ton of heavy construction on the property. It's not for the equine faint of heart.

And I'll write up more about the schooling later, but the Hard NO made a very dramatic appearance, this time at the ditch. Boyd has a series of ditches in a row, right up against the busy road that are fully revetted and DEEP. He's never seen one before, and very nearly stepped right over it before he stopped to look into the abyss.

Commence Hard NO sequence. Tail wringing, backing up, general worried behavior. My trainer pressed him a bit more, because he seemed so ready to hop right over and...

But this time we were ready. I jumped in, snapped my long rope lead on him and got right to work moving his feet with the trainer aboard. She sat chilly, urging him with only her legs and I led him up to the ditch. And wouldn't you know it, he hopped over... so they trotted around and we did the same thing all while on the lead. This is really where all the ground work comes into play. As you can see there's a big bush next to the ditch, so it's not like I could stand there and just lunge him around me. I had to get my timing just right to follow them around, without him feeling any tension on the line and keep his feet moving. We did this two more times and then I unclipped him while they trotted around and they did it alone. Piece of cake. Then he cantered it without any help. Success!

What we found, was that in order to shut down the NO, we just had to snap his brain out of it. That wasn't going to happen with a whip, or leg pressure, or by forcing him. He needed to move his feet, get his brain refocused and try again. In a weird way, I'd rather he have this kind of behavior that a dirty runout/stop. So when she moved on to the banks and water she was able to recreate this idea without my assistance. I helped him get his feet wet the first time, but he never got to the point of the Hard NO again.
For right now, that's our goal. We're trying to engage him in challenging experiences without pushing him beyond his mental limit. Now that we know where that line is, we can figure out a way to set him up for success. It's easy to forget that this is all brand new to him and his naughtiness is truly coming from a lack of understanding and confidence vs. just being a jerk. While rearing is a very, very bad vice, there's plenty of warning and the whole thing happens in slow motion, so I'm not condoning it, but I'm also not super worried about it either. I think we're on track to building his confidence on the ground and under saddle and making him feel like an absolute superstar.

So tell me bloggers... Does your horse have a Hard NO or a way of showing their extreme displeasure about something? If so, how do you work with it, ground work, under saddle, utilizing professionals? Any advice for how you might handle my situation?