To PRO or not to PRO?

I'm just going to start blogging again like I haven't been the worst blogger in history (ahem, my last post was a month ago)... but I moved my horse, and bought a house and that's enough with excuses!

Scout has settled in beautifully at his new farm that is THREE miles from my new house. Having him so close feels like such a luxury and I'm feeling quite spoiled about just being able to pop down to see him even if just for a few minutes. It's also taken a lot of pressure over what we do each ride so his life feels more varied and less stressful in my opinion.

So with the weather starting to settle down (if you can call 83 degrees Saturday and 50 and thunderstorms today settling down) -- I'm starting to look ahead at what the year might hold for us training wise.

And with all horse planning, I've been cautiously optimistic because literally anytime I set money aside for any sort of training/showing purposes the shit hits the fan (I'm looking at you NYE emergency vet call). So naturally just as I reach out to an UL rider for training my truck's transmission starts slipping. But this is not a post about that.

I'm a decent rider. I can ride a green horse and teach it to walk, trot, canter, leg yield, go on the bit and jump little things.  But beyond that, I want the building blocks to be rock solid. I have loose goals that I'd like to achieve. Scout is athletic and has a wonderful attitude, he's brave and willing. He's a big, bay ball of clay waiting to be molded into an event horse and I want to it to be done right. Because when I take him to an event I want to feel like we are BOTH well prepared.

When we had our short stint over in South Jersey he was being ridden fairly regularly by a wonderful event trainer who gave me some serious words of wisdom after she jumped him the first time. She said, "Don't get greedy... he's nice, he's got the brain and the athleticism, but it would be easy to do too much too quickly, go slow." And you know what, it really struck a chord in me.

So here we are after a winter of intentional and not-so-intentional slow going. Lots of tiny legos being pieced together to build him up to where he needs to be to tackle the next step. Lots of long walk warm ups, lots of doing 100 transitions per ride, you know, boring stuff. So when it came to getting him going over fences in earnest, I decided it would be well worth my money to invest in some training rides with a professional who primarily works with young TBs. I want him to feel confident and comfortable and to be rateable and bold.

I took him over to a big fancy indoor for a test ride to see how they paired up and she just LOVED him. She walked him around under saddle so he could check everything out (including himself in the mirrors) and warmed him up on the flat. She figured out his asymmetry pretty quickly and worked to block his un-eveness at the walk which helped him stay straight and balanced in the trot and canter. It's these types of nuanced fixes that make me feel like my money is being well spent. I get to see how someone more skilled that me can zero in on little things and figure out the best way to unlock him. She trotted him over a little vertical once or twice and quickly moved onto to cantering everything. Keep in mind, he's jumped maybe 4 times under saddle before this!

And what she was able to do, that I know I couldn't do nearly as well, is help him stay balanced and straight to the jumps, leaving at an appropriate spot and landing in rhythm. Sounds simple enough, right?

I want jumping to be fun for him and for it to all feel easy.

She let him see everything first and took her time introducing him to the liverpool even though he didn't care at all. He seems to understand the idea of lifting his legs and getting to the other side.


When we finished up, she concluded that she was dying to do more with him because he's just so KEEN, and yes... she'd take us on as clients:)

A week later (truck fixed with rebuilt transmission) I took him to the barn that she primarily trains out of for a follow up session. He unloaded, took a look around and I tacked him up for her. She got right down to business warming him up for 10-15 minutes at the walk getting him to keep his hind quarters aligned and to keep the contact and throughness in his upward transitions. She really got him stepping under himself so nicely, which paid off in the canter work. She started this time by cantering him over a cavaletti in both directions while holding him accountable for a good canter. 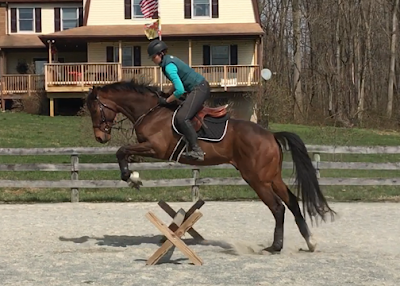 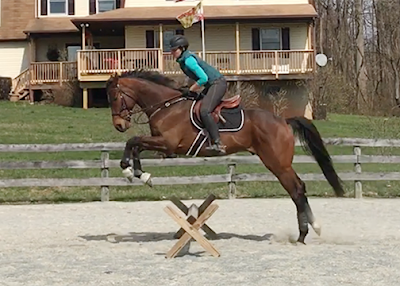 He did try to go around the cavaletti once when he got there with a bit of a bad canter, but man if she didn't hold the outside aids and he STILL jumped.

Again, she let him look at all fill on the jumps and touch the barrel with his nose, but then she just jumped him around like he's been doing it forever. What was really cool was seeing he rebalance him after the jumps, if he got a bit too keen she'd make a adjustment and then leave him alone, sort of an exaggerated half halt and he'd come right back into balance. 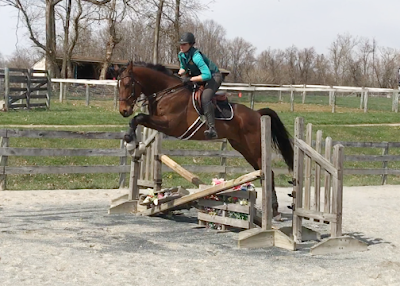 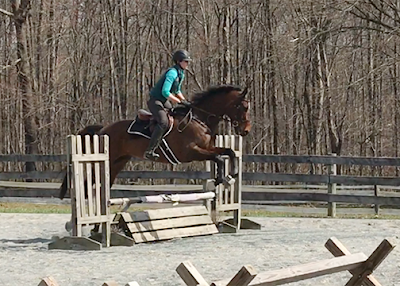 My favorite part was when she said she going to canter over the barrel one more time on the right lead and I see her heading to the two stride. He just boldly jumped in and out and even though the second jump caught him a little by surprise she brought him right back around and he jumped through like a pro. She stopped and said, "he just felt so good and the canter was so balanced I figured why not?"

What I am learning is that my horse is bold and keen, he wants to get to the other side. He doesn't really know what he's doing which is why I have utilized the help of a pro to get him feeling like a superstar over fences. I want him to jump out of balance, and even though she makes him look super easy, I know that my greenness would not help him at this stage in his training. She'll continue to jump him at a higher level then me for awhile so that the whole thing just becomes quite boring for him.

But seeing him go with a pro on board makes me VERY excited about the future. My goals are quite modest and I know that if I can get him happy, sound and comfortable mentally, I'll be well on my way to achieving them. Better yet, I'm able to get real time feedback about where he's at in his training. Where the holes are and the types of things I should work on during my rides with him.

So what say you bloggers? To PRO or not to PRO? Do you find value in having a professional school your horse, or do you prefer to do all the training yourself? Why or why not? I know the answers for this vary wildly and I'm so curious to hear your opinions. Meanwhile, we'll be over here on the slow boat to BN, one jump at a time.