In prep for Scout's eventing debut, we scheduled a lesson with Bruce Sr. to help work on some sharpness over fences. Naturally, he didn't disappoint on getting Scout to respect the jumps a bit more, wait and jump a little tighter over some combinations. They also worked on getting him to keep his head up and chin out a little so he really sees his distance and not get so close to the base. 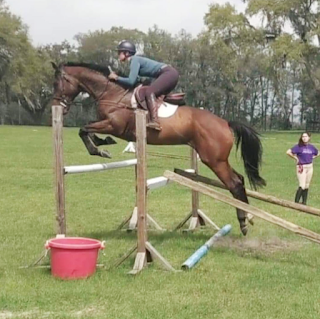 Best of all, Bruce thought Scout was very nice and is going to jump a fence. So I can die happy now:)

They did one more xc school before the event and she said he jumped awesome so we kept his entry at Novice. And, I'm just going to apologize for the crappy screenshots, but fingers crossed I may have some decent pics coming eventually.

Leading up the event Scout continued to have some puffiness on his face so he got a king's turnout attached to a stall to help quell whatever was triggering this reaction.

Being 1000 miles away for his first event was both good and bad. The event wasn't being live scored, there was no pro photographer, and I didn't have any friends nearby to send me constant updates. The venue had over 200 entries for the HT and as it was the first schooling event of the year (for this venue) it was certain to be entertaining. But, based on how nervous/excited I was it might have been a good thing that I wasn't there.

Dressage -- Novice Test A:
From what another competitor told me, warm up was a bit wild and crazy -- but Nora said Scout was perfect. Luckily for him, he was able to chill on the trailer and take everything in while his buddy rode in an earlier division. He's always been pretty good about new places -- he typically unloads, takes a look around inquisitively and then takes a deep breath and gets on with it. But, I was relieved to know that the added atmosphere of the event and human and horse nerves didn't derail him.

They laid down a beautiful test. Note to self: the Novice A test has a LOT of trotting, but also looks pretty fun to ride. He scored a remarkable 26.90 to secure him a spot 2nd after dressage.

I thought the notes on this test were quite firm for a schooling show, but it's been a LONG time since I competed so what do I know:) Once he gets the idea of a real free walk he's going to really up his game, hehehe. All of that said, I don't think I'll be replicating a low score like this anytime soon on him, but we have something to strive for!

The course was on grass and a little bit of a hill which proved tricky across all three Novice divisions with rails flying everywhere. Overall, I think he really tried hard and considering two months ago he had never jumped a full course, I was thrilled with the outcome. The course was quite twisty with two real related distances on course, a 5 stride and a 2 stride. The two stride came after a big oxer placed downhill and he got a bit out of balance coming back around to the combination and got a bit too deep tapping both with his hind legs on the way out. He made sure to give the last fence plenty of room for good measure to finish his first Novice course!

He wound up adding 8 to his dressage score and no time. Both Stadium and XC were timed which is not always the case for events around us in PA. I think it gave the event a feeling of a recognized show without the extra money or stress. I don't have any footage of xc (still hoping some photos come through from the photographers that were there -- they had a few ammy guys show up to take pics last minute). She said he just ate up the course and was super confident throughout. He was one of only a handful of horses to go double clear xc in the al the novice divisions! His boldness xc paid off as he was able to snag a 3rd place finish for the day!

Without the rails he would have won his division, but honestly, my expectations were for him to simply have a confidence-boosting outing... so coming home with a stellar dressage score, a clean and confident run xc, and some homework for show jumping feels like winning to me! He had one of the best runs across the division and I am so super proud of how trainable he's become.


Looking ahead*, we had originally planned to run him on the way home at Full Gallop, but we're going to wait and get him out in PA to make his Recognized debut in April! Once he gets home I'll get back in the irons under the watch of Nora who will continue to put rides on him (I'm going to keep him with her for the time being) and once I get jumping again we'll look at the calendar for a suitable event for me to take him around! By then, he will hopefully have a few events under his belt and tons of confidence to make a good partner for me!