Ocala visit, Part 2 -- The kid is pretty special (and a massive photo dump) 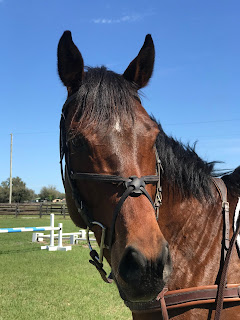 The second day I was in Florida (I arrived Monday morning and left Wednesday evening) turned out to be a bit of washout. We had planned to take Scout over to Justin Dutton's farm for one of her schooling jumper shows where you pay for one round and then get to go back in to fix anything that didn't go well, alas the weather had other ideas. The show was canceled due to a whole afternoon of downpouring -- booooo. I did spend the morning over at the Davidson's Florida compound and to hang out with my favorite little person, her pony and I got invited to go on conditioning rides with Andrea. Yes, PLEASE! The funny thing is that I've never ridden with or around her at all, so it was such a special treat to get to ride their upper-level horses without any kind of knowledge of my ability. Their Florida farm is on 600 acres, has a full track for gallops and a conditioning path that goes around massive fields with undulating terrain. After not riding for almost two months I was a little worried I wouldn't be able to keep up, but it turns out all that gym time has been paying off!


We did a series of trot sets and even galloped a bit which was super fun on something that is decidedly NOT a thoroughbred. The horses were all a bit wild that morning with the incoming weather a drop in temps but I had an absolute BLAST.

Scout got a bit of a spa day en lieu of the schooling show, and was not super psyched about Mom rolling in to pull his mane and make a fuss over him. I stuffed him full of treats which may have softened the blow a little:)

Wednesday, we planned to take him over to the venue of his debut event to xc school. Nora had only taken him xc once before and she was super excited to get him out again. I was so pleased to tag along and play groom while she schooled Scout and another client horse. What's even better, is that I got to see just how much he's matured in every way. He hopped onto her big rig without an issue, tied at the trailer and stood quietly for tacking and walked flat-footed across the property with an inquisitive look in his eye.

It was super nice to see how she warms him up for XC. She walked him for 10-15 minutes before picking up a big, forward trot in a giant figure eight around a bunch of jumps. She walked and trotted through the water complex while doing this and picked up a canter and continued on a figure eight, adding in lead changes (!) and going up and down hills to help set his canter in balance before sending him toward any fences.

But, on to the good stuff... She's got him solidly in front of the leg and thinking forward but with a very reliable half-halt to utilize to help him sit and wait when she needs him to. 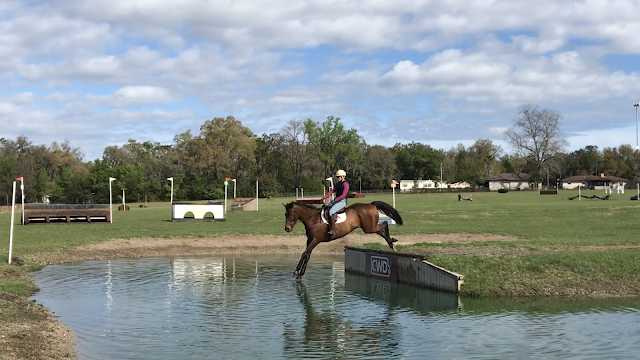 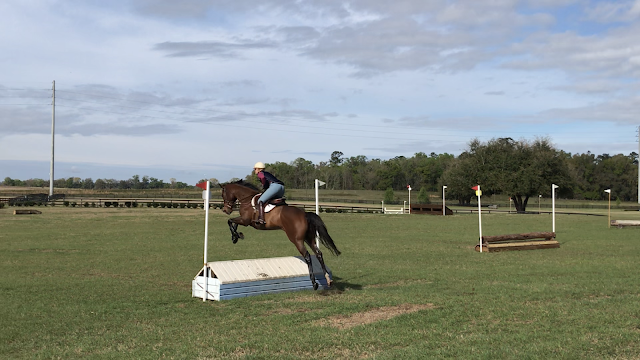 I was super pleased with his attitude about everything -- he's become such a professional about his job and he's proving to really have the right elements to make a great event horse. He still gets it wrong, maybe 20% of the time, but he has VERY good instincts to get his giant legs out of the way and carry a rider successfully to the other side -- better yet, he doesn't get upset or hold a grudge, which is perfect for an adult ammy!


I'm SO excited about our future together and I'm so unbelievably happy that he and I have met a trainer who gets us both. She has developed a really special relationship with him and he is giving 110% back to her in response. And even though I have to wait a few more weeks to hop in the irons myself, I'm even MORE excited now. He makes his eventing debut tomorrow -- so please send good vibes our way, hopefully, I'll have good things to report in a few days!