Scout is responding well to meds. His fever is staying down and we switched him from banamine to bute (to wean off over the next 6 days). The antibiotics are doing their job so far and he's being a pretty good patient about having syringes shoved in his mouth and having his temp taken all the time. His neighboring stall buddy is staying in to keep him company, so that's quelling the building #FOMO (for now). He's bright, alert and back to his normal personality of HI, HELLO, HI, TREATS?

His leg is still very swollen. It's less hot and much less sensitive to palpation and touch but it looks scary. The vet said I could try DMSO, but it could potentially aggravate him (any suggestions for topical anti-inflammatories) plus it's not fun to mess with. For now I've been instructed not to wrap it and luckily the LH isn't any worse for the wear, fingers crossed that continues. 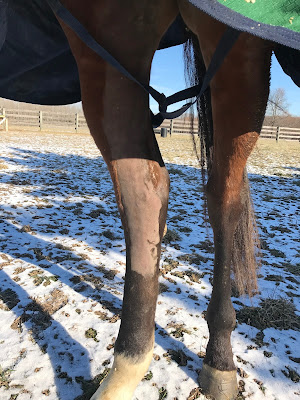 He's much more comfortable on the limb. He's not favoring it at all. I hand walked him this morning and he came out of his stall much less stiff. If you didn't know him you probably wouldn't think he was lame at all. I can see the difference in his gait and the shorter step he's taking with the left hind to support the right. He's in very good spirits and seemed to be feeling VERY full of himself out walking (it helped that the other horses came galloping up screaming).

I'm not sure how the next 12 days are going to go. While I'm grateful for the cooler temps in terms of helping reduce the swelling, Scout is already fed up with being inside. I've rarely used a chain on him for anything ever and today I preemptively put one on him and I'm glad I did! When all the horses came running up, he started screaming his God Damn head off and dancing around. A quick reality check and I asked him to keep all four on the floor and act like a gentleman. It helped that I had a pocket full of treats to help bribe him when he was being quiet.

So, time to invest in some stall distractions and maybe scale back his grain intake just a little to keep a lid on things. He's also convinced that the only good hay in the world is alfalfa soooo there's that.

I'm being cautiously optimistic about his recovery. He's got at least another 12 days of Baytril to go, and a lot can change in terms of swelling etc. After dealing with his fetlock I feel like I'm more equipped emotionally to deal with the slow recovery process. Scout continues to impress me with his good natured attitude about everything and he doesn't seem the least bit worried about getting cast again, as evidenced by his constant need to roll in fresh shavings.


I'll try to update more on his progress in the next two weeks, but I don't want to monopolize the blog with debbie downer content, so I'll try to sprinkle in some back burner posts I've been sitting on.