I signed up for this little schooling show last minute, but with things going well on the flat I figured a chance to get him in front of a judge would be a great idea. With that in mind, and to keep my nerves at bay, I set some goals that I thought would be attainable.

Mainly...
1. Don't get eliminated for something stupid
2. Don't fall off
3. Conquer our first warm up
4. Remember my tests
5. Have fun

When one of the trainers at the barn asked me if I'd like to let Scout stay the night before the show (due to my ride times) I jumped at the chance. Having him there and settled could only improve our experience and in the long run, it will help give me a good indication of how well he handles overnighting in a new place -- and more importantly, how rideable he'll be without turnout in a show atmosphere.

So he got bathed and primped and we packed up his things on Saturday. 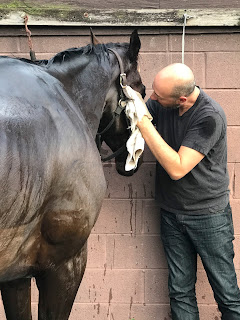 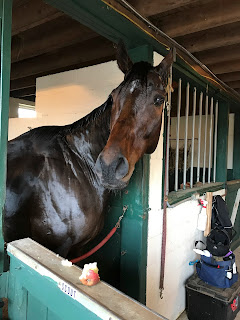 He's becoming such a little diva now that he gets all my attention (also, he doesn't let me wash his face like that -- so spoiled by his Dad!)

There was nothing to fret about though because he traveled over there like a champ and settled in like he already lives there. *Fun fact: he got to spend the night next to Nolan (Tango)! I tucked him in and spent the rest of the day cleaning my tack and getting myself organized for the show. It's been almost 2 years since I've competed so I was feeling all sorts of nervous and rusty. I really wanted Scout to have a positive and rewarding first show experience, so how I was feeling was really secondary. I think focusing on that aspect made me less nervous in the end.

On Sunday, I checked in and grabbed my number. They told me I could take him into the indoor to look at the dressage ring (it's kinda old school with BIG letter boxes and chains that make noise if you hit them). He was so ho-hum about the whole thing. No spooking, no snorting, just wandered around and took a breath and then kinda looked at me quizzically.

Since we were the first and third rides of the day I was hopeful that warm up would be nice and quiet.
He was a little goofy for me to get on, but once I swung up he felt fine. We walked over to warm up and we were one of two to start. This was a perfect way for Scout to get used to the feeling of a warm up without too much chaos. There was still plenty to look at with the indoor within view, trailer parking traffic passing by and horses coming in from turnout. People were setting up chairs around the warm up area, and more horses started trickling in (including Megan and Indy) and Scout didn't seem to care at all. He started a little tense and looky (boy does he know when he doesn't have a running on), but I just kept his mind busy and asked him to pay attention and he started to settle in.


I was conservative about how much warm up time to give him because I needed to stretch his legs and get him listening to me but I also didn't want to cook him or get him worked up if he found the other horses going around too much to handle.

We got our warning that we were up next and before I knew it we were heading down centerline for the first time together!!!!

We rode Intro A first which was a perfect way to get a feel for him in the dressage court. I was worried it would feel very claustrophobic for us, so I made my goal to maintain tempo and have a nice obedient test. The judge was super nice and jumped out of her truck after every test to give individual feedback. She asked me a little about Scout and was really complimentary of him saying that he had an exceptional mind. She said he's going to be a very, very nice horse and gave me some things to work on at home.


That test scored 61.250 with remarks that I expected (lacks bend, above bit), mostly 6.0's across the board with two 7.0's and a 5.0 on our free walk. I was most pleased with her notes on the collective marks, which again were 6.0's across the board, 7.0 for rider and a comment that he was a lovely horses with lots of potential + that I am a very accurate rider (!). There was an additional message to me to remember to sit in the center of the saddle (hahaha... helps when your stirrups aren't a full hole different, oops).

Next up was Intro Test B... two halts!!! Much Complexity.

We didn't do as well in this test, but I wasn't unhappy with how it rode. I tried to remember that even if we flubbed a movement to just move on and try not to leave any points on the table. He felt really obedient and quiet (possibly too quiet, but I resisted the urge to ask for too much trot, having him get unbalanced and then having to reel him back in). The judges commented that she's curious to see how he'd go if I pushed for more trot and gave him nothing to brace against on the inside rein (specifically tracking right). I totally appreciate her comment, and she gave me more things to play around with as practice.

Again, mostly 6.0's, one 5.0 (centerline/halt -- not immobile), one 4.0 (free walk) but THREE 7.0's (both medium walks, and our last centerline/halt). Collective marks were the same as the first test, and a 7.0 again for rider. She also remarked "lovely pair" and "very accurate".

If you want to watch some really boring intro tests, you can find them here:

Overall, I was absolutely thrilled. My main goal for the show was to make Scout feel like a superstar. I'm not sure he fully understood what all the fuss was about, but he certainly didn't complain about all the extra attention:)

The icing on the cake was getting Scout's very first ribbons: 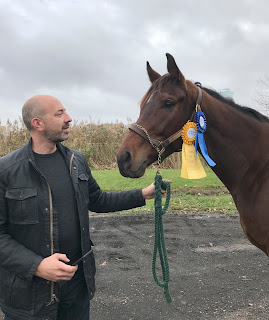 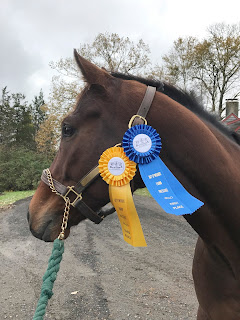 A big shout out to Travis for being the epitome of calmness throughout the show and learning a little more about horsemanship one show at a time (he put Scout's bell boots on before he got on the trailer, swoon) -- I don't know how I'd shine so brightly without you.

And Scout? Well, I took him home and reunited him with his turnout buddies and hilarity ensued. He thought he was such hot shit showing off for his friends.

I'm so pleased with the kid. This winter I think we'll try to get out to a couple of dressage shows and some little jumper shows to get some experience under our belts so we're ready to go in the spring. Thanks to everyone who wished us good luck and gave us positive feedback on the blog leading up to the show. We love you guys!
Posted by Niamh at 5:49 PM