A few weeks ago when Scout was coming in from turnout, he and his turnout buddies had blood all over their flysheets. After careful inspection of all the usual causes (lacerations, etc), we found that Scout was the culprit and was bleeding very slightly from his right nostril. He had no other symptoms of any kind and no outward sign of trauma.

It's not completely uncommon for a horse to get a nosebleed, so we took the wait and see approach as it was just barely a trickle. Our thinking was, we'll wait until the end of the day and if it's still bleeding actively, we'll have field services stop by. By the afternoon, it was still trickling bright red blood so we had our vet swing by to take a look. She was able to scope him to rule out anything going on in his lungs, etc (which would have been quite scary) -- through the scope she could see a few blood clots quite high up in his nasal passages but the scope couldn't go any further than that to figure out the cause of the bleeding. She gave him a clotting agent to help stop the bleeding and we would recheck in the morning. 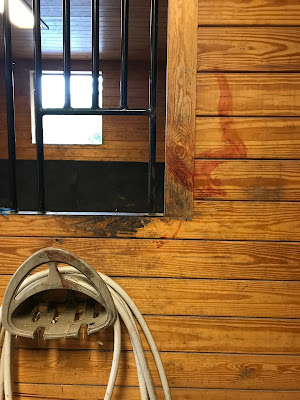 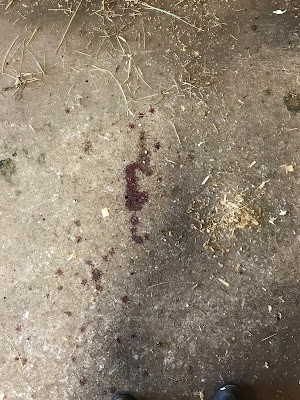 Overnight, the bleeding continued, not enough blood to completely panic about, but enough that despite the clotting drug it was not stopping. I met the vet later that day to rescope him with a different device to see if we could go a little deeper. I had a real proud mama moment when the vet told me how wonderfully behaved my horse is. I mean any horse you can scope with zero sedation is a GOOD BOY:) She was able to show me what she was seeing in the scope, which was more blood clots way up high and we STILL couldn't see the cause of bleeding. At this point, the vet recommended that I bring him into New Bolton for further diagnostics. Again, she wasn't completely alarmed and it wasn't emergent, but since we couldn't figure out where the bleeding was coming from we needed to rule out every possibility. The next day we brought him to NBC for more tests and I'd be lying if I said I wasn't pretty concerned.

By the way, when your horse has unexplained bleeding from his nose, don't Google stuff... that's just not helpful at all. All I kept imagining was Scout having guttural pouch mycosis and bleeding out.

Realistically, I knew that the outcome was probably very good... but it's never a great feeling taking your horse to a big clinic. And now that Scout is insured it was a no-brainer to allow New Bolton to take whatever measures needed to figure out what was going on.

They decided to scope him AGAIN, and were able to see that there was a small amount of active bleeding way up high in the nasal passage. The suspected cause was probably roughhousing in turnout (or bumping it somehow), so they wanted to rule out any kind of major trauma in his head before sending him home. They took radiographs of his head and they could see a small amount of fluid (blood) which confirmed their suspicion about the cause of the nose bleed. We were able to take him home a few hours later with a super prognosis. He was confined to small paddock turnout for a week and no riding, and once the bleeding had completely stopped he could go back out and resume work.


I was so relieved to see the bleeding resolved and he was super happy to get back to work. All told he had about 10 days off and with an event on the horizon, we were eager to see how he was feeling after a little break. Thank god for thoroughbreds who don't miss a beat!