If you been to Plantation before you're (hopefully) gonna think my illustration is hilarious. But I need it to help describe how the venue is in a class above most as far as events go. They run recognized and start trials there but I'd consider it one of the tougher venues in Area 2 for many reasons.


It's built into the Chester County hillside and is basically a big hill with a proper arena up top, xc on one side and trailer parking on the other side. They alternate SJ and dressage in the main arena and either way you're kind screwed because whatever doesn't take place in the main arena has to happen on VERY sketchy grass on the side of the hill (near the trailers). For young horses or inexperienced riders (or both) Plantation is a BIG ask. I'll call it the great equalizer.


Scout has xc schooled there exactly one time (they offer a single xc schooling day per year) -- and was almost a full year since he's seen that big hill or been around that kind of atmosphere. The entries were stacked across the divisions and since he had to be entered in the ON division, I decided to forget about the scoreboard and hope for a great outing in all three phases.

Scout had the earliest time in his division which I knew would work against us, but (again) I really didn't care about that. What I did care about was that he walked flat-footed with gusto up the hill and away from the trailers. The warm-up was fairly quiet, and I was stunned watching just how fluid and obedient he was being. 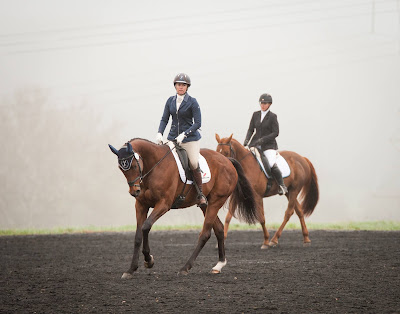 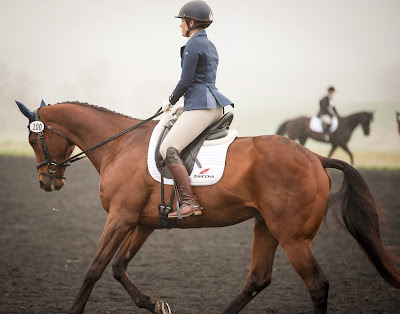 They scored a 34.5 which put them in 3rd in their group and in the top 5 or so across the division. Obviously, I expected a big difference between a schooling show and a recognized event in terms of the dressage scoring. I would say as a guide you can tack 10 points on to whatever you might score at a schooling show. Scout's test was relaxed, obedient and accurate... but he lacks mileage in the sandbox and loses points in typical spots, like reaching down during the free walk and a little more OOPMH in his gaits. The judge liked him and has some nice comments about him overall. 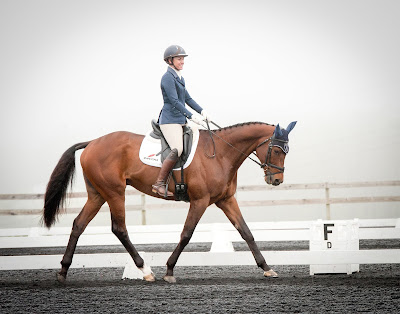 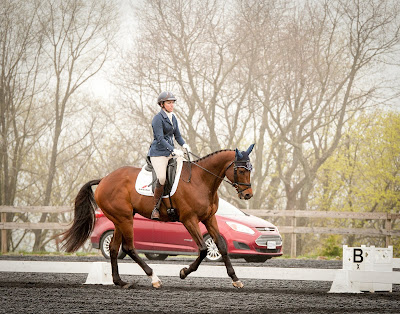 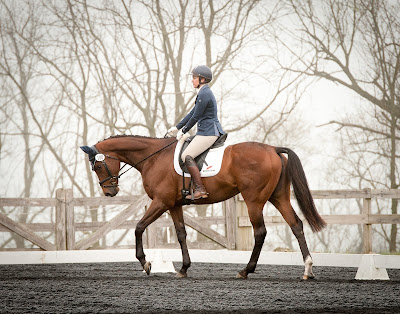 He waited patiently for his trailer buddy to go fancy prance and we got him ready for show jumping. The SJ warm-up was much kinder than the actual course itself which was wedged into the base of the hill and had gotten completely torn up from the upper divisions the day before when it poured. Regardless, he warmed up beautifully... jumping from a nice open stride. The only problem was that the Sj course did not allow for that kind of stride at all.


Overall I think he had 2-3 rails down, which were simply green. The scope isn't the issue, but adjusting is stride is still challenging. His half-half is fairly confirmed and when he listens, he's able to wait and really push over the fences and that's when he jumps best (no shock there). They left the ring knowing exactly the kind of homework they need to work on. I think SJ will always be his hardest phase until he really figures things out with those long legs!

The course walked pretty fair for the level. My apple watch documented 11 floors of elevation gain throughout and the course designer used the terrain pretty thoughtfully. I wouldn't call Plantation a move-up course, but I don't think it was unfair either. There were a few combinations but no ditch. 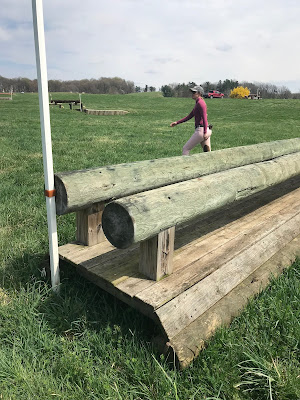 Scout walked up the big hill one more time to warm up for xc and his little face at the top of the hill was SO cute.
He was pumped. Warmed up over a few jumps and headed to the start box. The weather had a turned a bit over the course of the day and not only was it super foggy, but a light rain had started. He jumped the first two fences great and came up the hill to the jump with the fake brush on top, took a peek and then slid into the base. I honestly thought he was going to jump it from a standstill, but she regrouped him, picked up a canter and he popped right over. Again, it wasn't naughty but I think when he went to take a look at the fence he lost his grip on the slick grass (he's only shod up front). Once he was over that he locked on to everything else and jumped around SO boldly gaining confidence with every jump. He's really going to be a XC machine. He finished the course hardly blowing at all and even with the stop he came in right at the optimum time. When I met them at the finish and walked back down the hill Nora was smiling ear to ear. She said, "he's going to do everything you want him to do... he's got such an amazing brain... and I can still have fun at the higher levels." What a super vote of confidence for the young kid!

**hopefully, I'll have xc pics to add here soon -- I just need to coordinate with the photographer**

It's easy to forget that this was his second event ever. He handled everything with such maturity and eagerness. He stayed happy and forward throughout the whole day and better yet, he came off the three phases like he just ran around Kentucky. He literally strutted back to the trailer. While there were green moments, I never thought he felt over-faced or that we were asking anything beyond his skill or fitness level.

And while the scoreboard doesn't reflect what he learned from the day, I couldn't have been happier of how he handled each phase and as a much more seasoned horse at the end of the day. Onward and upward to the next!!!