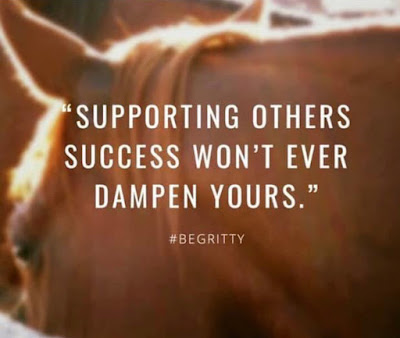 I saved this quote a few months ago after doing some hard thinking about the way we support one another both publicly and privately. There's been some conversation going on around the blogosphere about this very topic but I think it's important to highlight. I think we're all guilty of passing judgment behind the scenes, and the risk of putting ourselves out there on a blog is that our readers are going to have opinions (both good and bad) -- so we prepare for them every time we hit "Publish". Mostly though, I hope that the people who read my blog try to understand me and my journey and respect and support that even if it doesn't align with their goals.

So when I came back from Florida, I found myself a little tentative about sharing the details of my trip in fear of being scrutinized. Mainly because... Did I ride: YES -- Did I ride my horse: NO.

We came up with a plan before I flew down: to flat Monday, take him to a jumper show Tuesday and XC school Wednesday before I flew back. I drove straight from the airport Monday morning (4am wake up!) to go see Scout who did a bit of a double take when he saw me.

I had planned to flat him also Monday but after watching him go around with Nora, I decided that I'd perhaps hack him later on Monday or have a lesson Tuesday. She's JUST started to really unlock him on the flat and to be 100% truthful, I didn't want to hamper the progress they were making... she never pressured me in either direction, but it was clear that she was at a very crucial part of his training -- additionally, I think she wanted to show off what they've been working on:) And given the amount of time and money I am investing, I need things to go very, very well. She's finally got him really soft off the leg and allowing more pressure laterally. He's really working nicely over his back and coming through.

His transitions are sharp and focused, his leads are confirmed and balanced and his frame is much different. He's really lifting at his wither and as a result, his neck looks amazing! I was most impressed by the difference in his walk which has this intense freedom in his shoulder and push from behind. She's getting control of those long legs and he's getting a little better at listening and waiting for instruction vs. I GOT DIS.

The thing he's struggling most with right now is learning to use his hind end properly. He's finally got a good half halt installed but he still blows past it at times thinking he knows best, which usually ends in poles flying everywhere. Increasing his education on the flat and learning how to utilize his hind end is completely changing his jump style too. When he decides to wait and sit, he jumps like a freak. He's always been a good jumper but holy cow...

When he gets it wrong, he just jumps bigger. To be fair, this exercise was REALLY hard for him -- but he never stopped trying. She's adding lots of tricky exercises like this to really get him to learn to wait and sit. There were lots of poles before and after single fences to get his brain and feet thinking too. 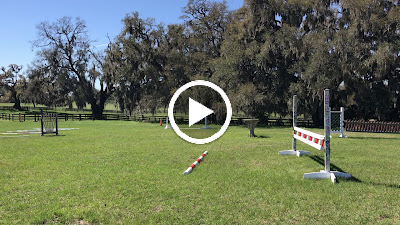 I was really pleased to see him locking on to fences and being so keen. He's really loving jumping right now, maybe even TOO much as he gets pretty bold and wants to do it his way. 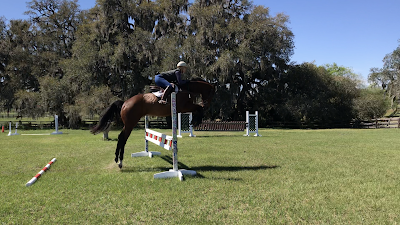 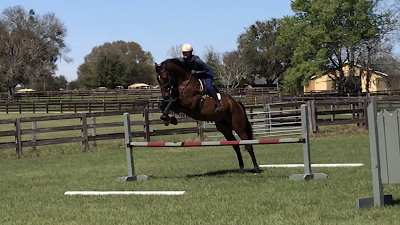 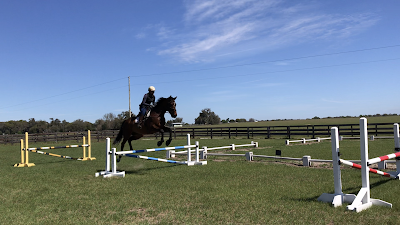 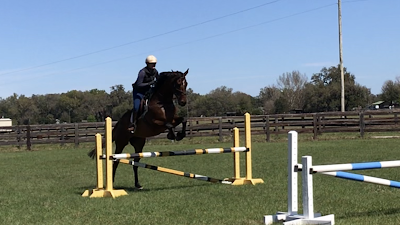 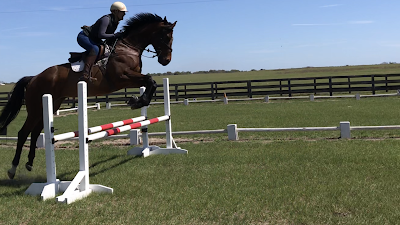 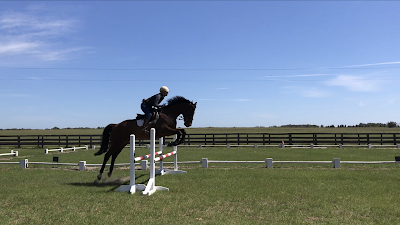 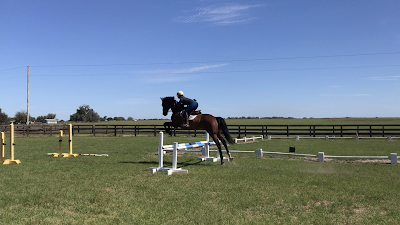 But he's learning to halfhalt and rebalance and when he does, his jump is really spectacular! She does an incredible job of supporting him and also staying out of his way without letting him feel abandoned. It's that kind of fine tuning that makes me feel so good about having him under the tuteladge of someone so experienced and intuitive. She's been schooling him at 3'-3'6" to get him going confidently higher than what he'll compete at (for awhile).

He was completely hilarious after she finished up while we stood there chatting he kept inching closer and closer to me so he could be touching me at all times. He definitely knows his mama! I got to spend some time with him cleaning him up after his ride and stuffing him full of treats.

And while I felt a little conflicted about not being in the irons myself, it was fabulous to see what he's learned so far and where he still needs work. She admitted that it took 4-6 weeks just to unlock him on the flat, and I believe it! It's clear that she's taken a methodical approach to figuring him out while always providing a way for him to find the answer. He's extremely happy with her program and it shows.

Stay tuned for the next part of our Ocala trip where the weather does not cooperate with us, I go on conditioning rides at the Davidson's and Scout goes XC schooling and blows me away! Thanks for riding along with us:)