After 13 days of stall rest both Scout and I were desperate to get him out and moving around. Hand-walking was occasionally quite scary (think, horse-shaped kite), or he'd be foot perfect. His leg continued to stay cold and tight, though his fetlock was still carrying some residual fill most likely as a result of being stalled. He's definitely prone to stocking up when he's not moving around too much, so I'm not super concerned about it. My vet and I spoke about a turnout schedule and given the weather, she highly recommended some drug-assistance. 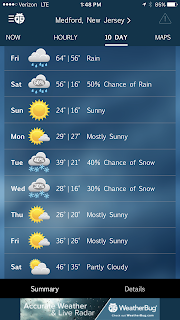 We went from highs in the teens and everything covered in a sheet of ice to driving rain, wind gusts over 40 mph and highs in the 60s. I figured Friday was the best day to try to put him out even with the rain as I thought the warmer temps would keep everyone a bit quieter.

So, armed with Ace and Xylazine I got him doped up and prayed he'd keep a lid on it. The ground was still completely frozen, just now covered in greasy mud and all I could think about was him running around and wiping out like a fool.

Turns out my giant baby is a bit of a lightweight. And apparently, completely attached to me now since he's been stall bound for such a long time. I literally had to White Fang him to get him to go with his friends.

And his herd mates were pretty cute about the whole thing. At first no one noticed him, and he went off and grazed alone. Then, they all realized he was out there and came up to investigate.

He's the unanimous herd leader and they were all very happy to see him. Scout? Not so much. There was lots of sass, lots of derpy running around. He kept trotting back over to me which kinda made my heart burst a little.

The temps dropped quite a bit overnight, but I followed suit with the same protocol for day two. He was a perfect gentleman and the whole thing was super low key.

On the third day I instructed the morning person just to turn him out last with a quiet buddy and she said he was super chill. Phew! My plan for this week is to get him moving a little on the ground and assess how he's moving and then leg him back up at the end of the week.

He really gave me a heart attack with this one I have to admit. He was SO lame the first day that I was certain his leg was broken. But if there's any silver lining to him being on stall rest it's two fold. One, he and I have REALLY bonded. Despite the weather being horrifically cold, he tried really hard to be a good boy about everything. I never once heard a negative word from any of the barn workers and he tolerated all the wrapping, medicating and hand-walking like a champ. He looks to me for guidance and boundaries and it's really helped our relationship blossom. The other positive takeaway from stall rest is his condition!

I actually cut his feed a little so he wasn't bouncing off the walls and added alfalfa twice a day to his hay. I think we've found a magical combination of hay and feed finally!

Thanks again to everyone who has reached out to support us, we've definitely appreciated all the love and good vibes! I absolutely adore this horse but man, but the reality of how freaking fragile they are is so real sometimes. I think though, despite the heartache and worry that seeing his face hanging over his stall door is enough to remind me how much it's all worth it in the end. 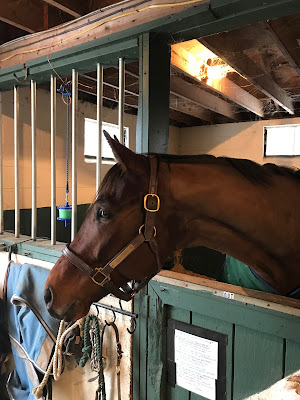