A moment in time

"Photography is a way of feeling, of touching, of loving. What you have caught on film is captured forever... It remembers little things, long after you have forgotten everything."
-- Aaron Siskind

For as long as I can remember, I've been behind a camera. It's a safe place for me. I'm uncomfortable being the center of attention, or really having any sort of focus on myself. I've loved the experience of being a photographer, of being allowed the opportunity to tell the stories of others through images. It's a gift, and one that I take very seriously. And in my whole lifetime, I can count on one hand the amount of photos taken of me that I've liked, that showed me as my true self, as a person I recognized when I looked at the images. Being on the other side of the lens creates an uneasiness in me that is hard to shake, a feeling like I need to perform or be someone I'm not. It usually leaves me feeling awkward and uncomfortable which results in images akin to a deer in headlights.

So when Britt came up from NC for Fair Hill, I got the wild idea to schedule a photo session for Scout and I. After looking through her work, I thought she just might be able to put me at ease on the other side of the lens and capture our young, but blossoming relationship.

From the moment we met, Britt felt like an old friend. I had completely forgotten in my haste of trying to shoehorn in a photo shoot with her that I was scheduled for my first shift of PM duties at the new farm. So as she arrived I was running around (hair and makeup done) in barn clothes like a crazy person. Luckily being a fellow horse woman, she totally understood and was quite patient as I finished up. We started off with a black background shot of Scout in the barn aisle:
Britt captured Scout's personality so well with this shot! Sweet and inquisitive and generally quite handsome. He was not the easiest horse to distract (he didn't care about the All Ears App, or the squeaky toys we were using), but he was very interested in what I was doing out of frame trying to get his ears up!

We wandered around the farm finding the sun (which had been hiding for a solid week before Britt arrived) and we were rewarded with the most gorgeous late afternoon light. We started off with just Scout and I having a quiet moment in front of the camera. 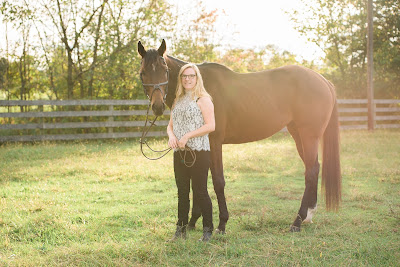 Britt and I were busy gushing about the light when my bf showed up to join the shoot. I was feeling quite relaxed at this point by some sort of magic Britt was sprinkling on us, but having him there made the whole thing that much more special. He's got a wonderful energy that animals (and humans) react noticeably to.
A quick outfit change and he headed off to explore more of the property.  Scout was an absolute superstar about everything we threw at him, wandering around the farm without a care in the world. There was plenty for him to get worried about with Halloween decorations everywhere, minis, and farm equipment, but he just walked flat-footed, curiously following me.


And as with baby horses, Scout did eventually tire of our antics but none of his naughty behavior was a shock to either Britt or I. We gave him plenty of breaks to graze (FINALLY) and Britt took time to shoot images without Scout so I could relax too. Her careful curating of everyone involved in the shoot resulted in images where everyone looks at ease, happy and in their element.

Fun fact about the image with the willow tree... Scout's little OTTB timer had gone off and he was just about done with our shenanigans which resulted in him using his head as a wrecking ball to get me to stop making him stand still. I'm sure there were hilarious outtakes from this, mainly me swatting at him angrily as he nearly knocked me over. I mean, I get it, he's young and we were definitely pushing his patience, but there's no excuse for rude behavior! Having a horse person as your photographer really helps in these moments as she's not likely to bat an eye and the exchange between horse and owner!

Britt was able to do something remarkable that day. She captured me in the most natural way. None of the photos look forced or posed, my smile is genuine (this from a girl with chronic resting bitch face), and the moments captured are truly magical.

But what Britt revealed to me with this shoot was something much bigger than just beautiful images. You see, I've been a photographer most of my life. I've captured the lives of people in so many moments of their lives... whether it's been their wedding day, or just a quite moment between a person and their animal and I've never fully appreciated what a gift I was giving them. Because I was able to freeze a moment in time for them, where they felt or looked their best, where they were happiest and most joyful... a quiet moment in time that could never be explained in words. So when Britt showed me these images, I was overwhelmed with emotion and I sobbed with joy that she was able to "see" me the way that I see myself, she able to visualize the love I have for Scout and Travis. I've been doing that for such a long time and I had no idea of the impact on the people I've photographed. These little time capsules we call photographs become etched in our minds and become memories that allow those fleeting moments in front of the lens to carry on for years and years.

These memories, these moments mean the world to me. Thank you Britt!