In the manner of full disclosure I'd like to share a little bit about Scout's feed and forage program. I was going to make this strictly a post about the progression of his feet (spoiler alert: they were a disaster) but I strongly feel like good nutrition, exercise, and supplements make a happy horse so here's a sneak peek behind Scout's feed tub.

What he eats (currently):

We feed most of the OTTBs this pelleted grain and they all seem to adjust quite well to it and eat it with gusto. Now that Scout is in work and decent shape, he doesn't "need" the added Fuel, however it's nice to know I can top dress his feed without him getting wound up. He's still eating more hard grain than I would like, but our pasture grass is not enough to sustain his weight.

Grass hay (locally grown and typically nice 2nd cutting) -- he gets his slow feeder hay bag stuffed so he has access to hay all day while he's in. He tends to swirl his hay into a mess in his stall and then look at it with a sad face, which is why it's in the hay bag now. Strangely, it took a little while for me to recognize that he wasn't really eating much hay in his stall before the bag and his weight blossomed after I installed it!
Pictured is the Gatsby Slow Feed Hay Bag. It's inexpensive and super easy to fill, it holds a ton of hay!

He's also on a Smartpak which includes Farrier's Formula Double Strength which I absolutely swear by (thank Riley for making me a believer) and Cocosoya SP for coat and weight gain. 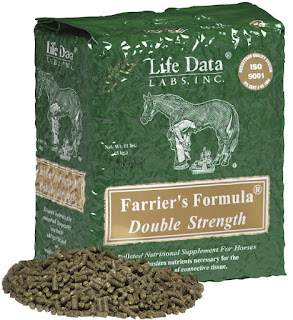 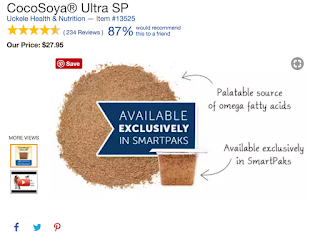 Honestly our feeding program is fairly uncomplicated (in the winter we add beet pulp without molasses). I'm lucky to be in full control of what my horse eats and how he's fed, which I know is quite a luxury.

The real proof is in the pudding though, yes? We're overdue for a new conformation photo (he's looking even better now that he's in more work) but this is a 6 week progression photo from the 3rd week in May to the 1st week in July:

I also groom the crap out of him, which thankfully he LOVES and I even splurged a few months ago and bought him very fancy brushes from Teddy's Tack Trunk:) I'm super excited to see his his body will change with a proper topline and more muscling.

I hate using thoroughbred stereotypes, but Scout came with "typical" Tb feet. Low heels, long toes, shelly hoof wall. What he did have going for him was a solid interior hoof wall, great concavity, a good frog and a solid sole. In the grand scheme of TB feet, we were still in decent shape. The heels and toe can all be fixed with time and a great farrier -- but having a patient owner is key.

Let's take a look of the progression over the last few trims:

What's frightening about the first photo is that scary event line that continued to become a fissure as it grew out. We knew we'd have to address is eventually, and in the second photo you can see that the farrier actually had to put the nail right in the crack (terrifying, and he pulled a shoe twice during this period, but because they were in the crack he didn't lose any hoof wall), but as you can see in the last photo, the rate of growth helped insure that by the next shoeing cycle, he'd be nailing above that crack, which should be nearly gone by the next trim. What I love looking at is how very different the quality of hoof is that's growing in and how drastically different the angle of the hoof is. I can feel a massive difference under saddle as the break over over is much better and he rarely trips anymore up front. You can imagine it was pretty tough to go around with those silly flippers and NOT trip! I'm really pleased with the heel that he's getting underneath his body and overall his hoof looks much more healthy. He does have two quite noticeably different shaped feet up front, but I think over time his RF heel will expand to match the LF a little more. He's currently growing hoof at an alarming rate and we're keeping him on a 4-5 weeks schedule to keep on top of that.

What's so tough about being patient about hoof growth is simply the waiting. My agenda can't ever come before my horse's and I'm willing to let that hoof get in really great shape before his workload gets super demanding. I'm certain that many other farriers may have addressed his issues a little more aggressively (as in, to make him more rideable in the short term) but I'm willing to wait as long as it takes to get his feet shipshape.

In addition to a good diet, excellent farrier care I also paint his feet with Farrier's Fix (it's amazing) and he lives, LIVES in bell boots! My farrier tends to shoe a bit wide as to allow the heel and hoof wall to expand, and my guy plays a lot, so it's bell boots or death! I really like pull ons, but he destroys them so I've had better luck with Davis bell boots for turnout.

What sort of feeding/shoeing habits do you employ? I'm so lucky to have an amazing farrier and I can only imagine how tough this would all be with a lackluster one. Do you spend time with your farrier? Any tricks of the trade you want to share?
Posted by Niamh at 3:28 PM