Sending my horse to Ocala is easily one of the toughest decisions I've ever made -- and I'd be lying if I wasn't questioning that decision constantly (see: chronic worrier). But I didn't decide to send him because he's naughty or because of my inability to ride him. I made the decision because it felt like the opportunity of a lifetime. I have ALWAYS wanted to go south for the winter and this year, I thought about figuring out a way to spend a week or two with Andrea and Scout. But ultimately the timing and financial aspects of doing a short trip would not have been worth it in the long run. So when this opportunity came along and I made the decision to go for it, after the initial excitement wore off I started second guessing myself. The support I have received by and large has really helped. Hearing from friends and bloggers that you're excited for us and has definitely helped me feel like I'm doing the right thing. But still, you doubt.

So when I packed the kid up for his trip, I tried REALLY hard not to be a nervous wreck. Would he make the trip okay? Develop ulcers? Lose weight? Hate Florida? Would he be happy? How would his progress go? ALL THE QUESTIONS.
And I waited with bated breath for every update...


Well, he traveled very well and settled in like a champ.

For the first couple of weeks, they spent a ton of time figuring each other out on the flat. He was really struggling with going forward and allowing leg pressure before he left (which I think was partially due to being stuck in the indoor up here), so she worked on getting him to respect and allow leg pressure and then sent him forward. From there, she's been able to start fixing other issues, like getting his haunches in line with the rest of his body and introducing real bend.


In a way, it's encouraging to see that Scout doesn't just pull this stuff with me and that I've done a decent enough job getting him to this point. Obviously, she's MUCH more adept at correcting his little evasions and it's really educational watching the videos she's sent me because her timing is just SO GOOD. He still wants to get on his forehand and/or curl when he doesn't want to carry himself and she just quickly corrects and sends him on and I think he really appreciates that she doesn't nag or make a big deal.


His transitions are looking REALLY sharp and she doesn't allow him to clown around on his forehand in the canter. The result is a really great looking uphill step with some real bounce.


But if I had any doubts about sending him south, that was all squashed when after only a few weeks she told me the most amazing observation. You see, Scout has always has issues with too much pressure, and much like a lot of other horses he needs to know there's an out. When he feels like there isn't one, he panics (remember the rearing???) So, one day we were chatting and she described a feeling in him that he has a bit of a claustrophobic mind... my mind was completely blown. How did this person who has only know him for a few weeks have that much insight? Saying his mind is claustrophobic is the most perfect way to describe his way of thinking and how it relates to his training. So with that insight she's been showing him the out and patiently applying more and more pressure and rewarding when he finds his way.

She's been jumping him a little, but has been taking it very slowly. She expressed that while he has tons of scope, he gets a bit careless with his legs when he gets tired so she wants to get him really fit and a bit sharper on the flat before taking him XC (can I just say I LOVE her for this?)


And it seems as though he's taking to southern living quite well. It's been so cold up here that I've hardly missed riding, except for the last few days when the temps were in the 60s. He's even taken to throwing little baby tantrums when he's been kept in due to storms.


The kid doesn't seem to be missing winter either. His new favorite thing is rolling in the sand. 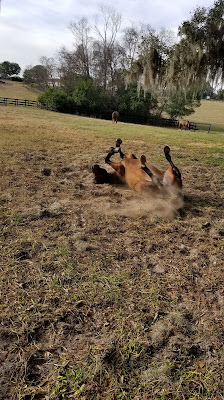 His condition is looking super and we've changed up his feed program a little to gear it towards the sport horse life (I'll post about this later). When I sent him off I was most worried about him dropping weight on the trip and losing a bunch of condition. Nora tells me he's LOVING the hay and vacuuming up every last piece. For the first time in my horse's life, he looks FAT.

So, I'm pleased with his progress so far. I am missing him intensely and I cannot wait to go visit (only 19 more days til I fly to see him but who's counting). My last update from her was that she's teaching him leg yields and haunches fore, and really learning how to bend through his body. She plans to take him XC schooling this week and I can't wait to hear how it goes!