Progress report (a catch all post about feet + weather)

Here's the thing... I think no matter what part of the country you live in right now, the weather has been complete and utter bullshit for everyone. Around me (Area II) events have been cancelled left and right due to rain and riders are having to tempt fate by riding in temps in the 100s just to get an event under their belt. We've gotten something like 300% more rain than we should have for this time of year and while it could be worse (rock hard ground), it makes getting any sort of riding momentum near impossible.

Because it's either raining for days or it's like this:

I've been pushing through and riding him even on the hottest days, but all the rain has messed up his turnout schedule and as a result not only is his skin getting funky, but his legs have all been taking turns blowing up. This doesn't alarm me like it used to and I usually just follow the protocol of working him to reduce the puffiness and then throw standing wraps on if he's going to be in for prolonged periods of time. Scout is typically the kind of dude that no matter how much time he's had off or how little turnout he's been getting he's pretty much the same, chill horse. However, he surprised me a little this week after a few days of little to no turnout by being a bit of a twit on the ground so we had a little refresher session on appropriate behaviors.

You see, his legs were fat and I hadn't planned on riding that day so I took him to the indoor to hand walk (because you guessed it, it was pouring, again) -- his next door neighbor was in there too (she's an adorable grey pony who just went to the pony finals!) so we did out best to stay out of their way by walking and trotting over poles together. When she left, Scout lost his ever loving mind and tried to bolt back to the barn after her and I was like HELL NO. So I grabbed a lunge line and the whip -- to which he took GREAT offense, as though he's beaten every day by one. Which led to ground work 101 for Scout. And you better believe he changed his tune (ahem, pic above). In the end, I wound up getting some very nice work out of him, even if I was ill-prepared and honestly, I think he needed to blow off a little energy anyway so we'll call it a win.


Anyway, all of this behavior at least let me see how he was moving and feeling after his first visit with the new farrier. He has been growing hoof at an alarming rate, and I was terrified he was going to lose a shoe before he could get seen and I was absolutely thrilled when the BO told me that the farrier said Scout has beautiful feet. I was like, "oh man, wait til I show you where we started."

I tend not to get on the bandwagon of "all OTTBs have bad feet" because that's simply not true, but what I can say with certainty is that any sort of major lifestyle change in a horse's career/life will impact their hoof quality dramatically. We didn't start with under run heels or excessively long toes, but we did start with scary looking event lines. 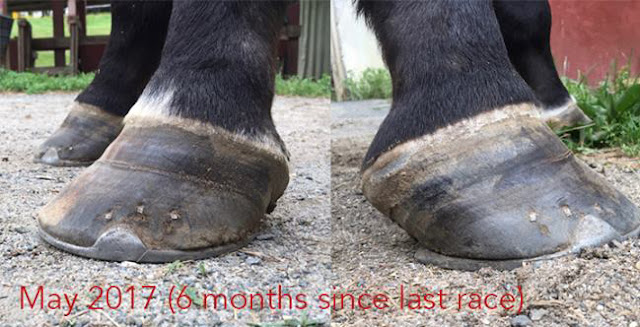 You can see that the new growth wants to come in at the proper angle but the rest of the hoof is just doing it's own thing, and looking quite scary. Watching these lines grow out was pretty horrifying, and I knew at some point we'd be nailing right into that crack and I thought for sure the rest of his hoof was just going to break off.

That's some beautiful farrier work right there people. My previous farrier would painstakingly shape each shoe like this and while it was exhausting to hold horses for him, he knew how to create balance like no other. Also, just looking at the hoof on the left above makes me shudder. Remarkably his feet did not fall off -- because that's not how that works (hahahahaha). You can also appreciate a nice, strong hoof wall making it's way to replace the old, shelly remnants.

In between this farrier and my current situation, we've been at two barns, one with a highly regarded farrier and one with someone who was a bit greener. Sadly, Scout could not keep shoes on with the farrier with the big reputation -- he is a very nice guy, and quick at his work but he refused to hot fit or shape shoes and Scout lost several in the short stint that we were with him. The other farrier LOVED Scout and got his feet back into shape (thank god they grow fast), which leads us to present day.

Those are some nice looking thoroughbred feet! Nice angles, beautiful walls, good breakover and heel balance! And as a result, I think he's moving the most confidently he has since I bought him. When you are giant and have spider legs having wonky feet makes you very clumsy! I'm also happy to report that he has not needed hinds since last fall either!

Now if only I could get him to gain weight at the same rate he grows hoof!!!!

How are you guys handling the weather in your part of the country? Are you struggling with nonstop rain or oppressive heat and humidity? What do you guys do with your horses to stay sane when you can't ride?